Translated in more than 67 languages and 25 years after its release, Paulo Coelho’s book still does its magic.

Have you read The Alchemist by Paulo Coelho? You may have, or possibly you have read quotes from it. Now, have you listened to the author’s music? Not yet? In this Sounds Brazilian blog post you will have the chance to not only know about his spiritual rock songs but also to listen to one accompanied by translated lyrics that will help you to reflect on less painful ways to deal with loss.

The Alchemist was first published 25 years ago in Brazil, Paulo Coelho‘s native country. The novel tells a simple fable-like story of a boy who, after having a recurring dream, decides to follow its guidance and take a journey in search of faraway treasure.  The boy’s adventure teaches him how to listen to omens and to follow his dreams. No one imagined that this story would have had so much power when its first publisher told Paulo Coelho that the book would never sell. He was obviously mistaken.  As of the week ending May 25, 2014, the novel had reached its 303rd consecutive week on The New York Times‘ bestseller list.

Is Paulo Coelho The Alchemist?

The book itself seems to mirror the author’s life. Paulo Coelho, in his youth, decided to follow his calling to be an artist despite family pressure to become an engineer. After facing turbulent challenges, including forced internment in a mental institution 3 times by his family members, he kept following his path and became, at first a very successful music composer in the Brazilian 70s rock scene, and later a world-wide known writer.

The Brazilian author in the 70s. He refused to accept family impositions and began a journey which included mental institutions, sex, drugs & rock’n’roll, explorations with darkness, and spiritual pilgrimages.

In the 70s, while immersed in the counter cultural movement, Paulo Coelho wrote lyrics for the Brazilian youth. His lyrics addressed existential and spiritual themes which  questioned material values, and which discussed alternative lifestyle, death, reincarnation, and loss. Several of his verses became popular hits through the voices of the two main rockers of Brazil: Rita Lee & Raul Seixas. 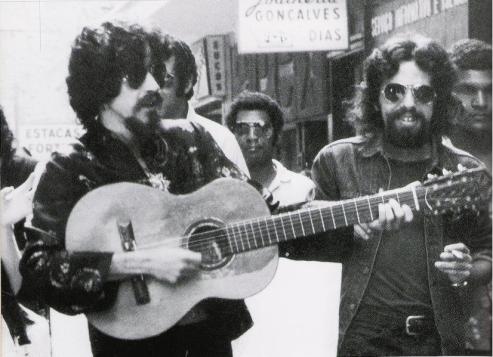 Raul Seixas & Paulo Coelho, in the 70s in Brazil. Paulo Coelho wrote many lyrics for the rocker that became classics in the Brazilian pop/rock scene.

LISTEN TO ONE OF PAULO COELHO’S SONGS and READ ITS TRANSLATED LYRICS:

In 1975, the Brazilian rocker Rita Lee released the album Fruto Proibido (Forbidden Fruit) that is currently ranked by the Brazilian edition of Rolling Stone magazine as the 16th best Brazilian album of all time in its “100 Best List”. The album contains two songs by Rita Lee and Paulo Coelho. In one of them, Cartão Postal (Postcard), Paulo Coelho‘s lyrics invite us to experience loss with less suffering and as a natural process in the flow of life. Take a listen to it and read the translated lyrics below:

What’s the point of suffering from departures? / If the one who departs does not take away
Either the sun nor the darkness / And the one who stays does not forgot
Everything that he had dreamed of, I know
Everything is so simple that it can be contained on a postcard
And if it is a love story it does not end that badly

Farewell brings hidden hope / What’s the use of suffering from departures?

If those who go away, had once come / and those who come, will depart
You suffer, you lament, then you go to sleep, you know?
When someone departs it is because someone else will arrive
In a moonbeam, on the corner, in the wind, or on the sea
Farewell brings hidden hope / What’s the use of…?

NOW THAT YOU LISTENED TO THE MUSIC….GO INSIDE and REFLECT